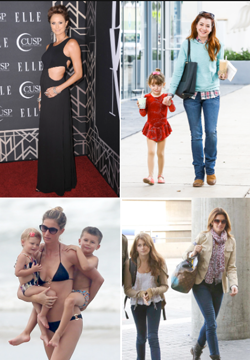 Hollywood is having a baby boom. And some of our favorite celebrity moms are welcoming their babies at home.

While home births still constitute less than 1 percent of total births in the United States, births at home have increased 50 percent since 2004, according to the Centers for Disease Control and Prevention.

Supermarket Superstar hostStacy Keibler and her husband Jared Pobre welcomed their first child on August 20, she announced on her website. The Dancing with the Stars alum welcomed daughter, Ava Grace, via home birth.

“Jared and I have been blessed with the new love of our lives,” the proud new momannounced. “Ava Grace Pobre was born at home on Wednesday, August 20th. We’ve never experienced a level of joy and happiness like this before! Thank you so much for all of the special wishes and positive energy.”

Former B2K singerOmarion, 29, and his girlfriend Apryl Jones have welcomed their first child – a son – the proud papa announced via Instagram August 9. “World. Allow me to introduce. MEGAA OMARI GRANDBERRY. He is 7 pounds. 4oz & 20 inches long,” he captioned the sweet snapshot holding his newborn in his arms.

“My son I’ve been waiting on you,” the R&B singer continued.

The new dad went on to gush about his “soul mate,” who welcomed their son via home birth.

“God is the realist!! I witnessed a miracle,” he added. “My soul mate @aprylsjones is so strong! Not only did she have a un medicated birth (no drugs) she did it at home. Naturally. Just like my mom had me. I love you. thank you for having my legacy. I’ll forever belong to you & you will forever be tied to me. Creating a child takes no love or skill but being a parent requires lots of both. Thanks for watching me grow. #MEGAAhome #OmarionsonMEGAA #donthateonmysonsnameillkillya #Nolol #royalObloodline #blasain #mysongotgoodhair #freshpitthewombhandsom alright. I love y’all.”

During an appearance on TODAY, Rogue actress Thandie Newton talked about the joys of home birth. The mom-of-three proudly said she birthed her son Booker, now 6 months, at home on her bathroom floor.

When asked why she had all three of her kids at home – she and husband Ol Parker are also parents to daughters Ripley, 13, and Nico, 9 – the Mission: Impossible II actress said she feels much more comfortable at home.

“I’d never been in hospital as a child or as an adult really, and I just associated hospital with being ill,” she said of her decision. “And I felt beautiful and healthy and wonderful when I was pregnant, and being at home was the place I felt most relaxed and comfortable.”

She went on to talk about the taboo topic, saying that home births used to be the norm.

“There was a time when everyone had their babies at home,” the Crash star, 41, said. “It wasn’t such a big deal. It’s more about as a woman what do you feel most comfortable doing, and you make the choice, and I chose to be at home.”

Alyson Hannigan has quickly become one of our favorite celebrity moms since the birth of her first child, Satyana, in March 2009.Celebrity Baby Scoop sat down with the How I Met Your Mother star and asked about her drug-free homebirth.

“Yes. I did use a midwife and a doula,” she said. “We had the option of having a doctor there, but even he said you’ll only need me if you need to be transferred to the hospital–which thankfully, I did not need.”

Before welcoming her second daughter, Keeva, the American Pie star said she faced many fear-based comments about going forward with another home birth.

“Yes, we had lots of comments about it,” Alyson said. “And we had the doctor that scared us tremendously. There was definitely more concern the first time around. For me, that was just the perfect place. I am absolutely terrified of hospitals. so I think that the home is the best place for me to feel comfortable. I had a midwife, her assistant and a doula. It will be the same again this time.”

The Big Bang Theory star and mother of two talked about her second son’s home birth, while her elder son watched.

“Fred, yes, was born at home, and Miles was able to watch the whole thing from his high chair while eating granola,” she said. “Fortunately it was a very fast labor because I think Miles would’ve been bored if it was longer than the hour and a half it was. He loves it, he still talks about it. It was something we talked about with our pediatrician, and believed very strongly in older siblings being present, and giving the choice. We gave him a choice before, we prepared him with videos about homebirth that our midwife prepared. Even during, I said, “If Miles wants to go the next room he can!” But he said, “No, I fine!” He got freaked out by the blood, but it was still nice.”

On Christmas Day 2011,Alanis Morissette and her husband Mario Treadway welcomed their son Ever into their home with the help of a midwife and a doula.

“I didn’t really even imagine myself having the birth experience in the hospital,” Morissette toldToday. “My home is like my little sanctuary.”

She added: “My husband was at my side the whole time, my total hero. And the rest was really up to God.”

Throughout her home birth, the singer says she tapped into an inner strength.

“The experience was beyond pain,” she admitted. “It was a transcendental experience. I just went to this whole other world. I basically had to be the little soldier that I am and really focus on this new beautiful creature coming out of me.”

She went on to talk about the joys of home birth.

“I think once people know it’s quite possible to have a really amazing home birth — and in my case I have no regrets and would do it again and in the same breath it wasn’t the easiest experience of my life — I think having it be an option is really exciting,” she shared.

One of the most outspoken celebrity moms on natural birth is supermodel Gisele Bündchen. The former Victoria’s Secret model gave birth to her first child Benjamin in December 2009 and has openly spoken about her drug-free and pain-free home water birth.

“My delivery was in a bath tub, in water,” Gisele said. “I wanted to have a home birth. I wanted to be very aware and present during the birth… I didn’t want to be drugged up. So I did a lot of preparation, I did yoga and meditation, so I managed to have a very tranquil birth at home. It didn’t hurt in the slightest. The whole time my mind was focused in each contraction on the thought ‘my baby is closer to coming out.’”

A few weeks later the supermodel looked svelte on the cover of Vogue and spoke of her “empowered” birth experience.

“I wanted to experience the transformation,” the model mom said. “It was the most amazing experience of my life, feeling him come through my body. And once he was born, I never felt so empowered as looking at him and thinking, Oh, my God, we did it together!”

The Brazilian beauty later wrote on her blog:

“I am blessed to have been able to have a home birth surrounded by love, where I was able to feel safe,” she wrote. “It was a powerful experience. I never felt so vulnerable but so strong at the same time. It was amazing to experience my body become free to do what it was made to do by allowing my mind and my body to let go and be free to experience the changes taking place within… I was just there… focusing on my breathing and relaxing the best that I could… so present, to witness the biggest miracle in my life happen before my very own eyes. To give life to another being, what a gift!”

As well, Gisele added her voice to the Birth Around the World Project to help promote the humanization of birth.

“I had the opportunity to experience the natural process of birth and it was one of the most life changing experiences for me and very very special!,” she said. “I believe it’s a woman’s right to make the decision about how she’s going to give birth to her child. And it’s also her right to have access to the information she needs so she can make that decision from a place of awareness, and not a place of fear.”

“I actually skipped the hospital … We decided to have the baby at home because we wanted it to be a natural birth, and it turns out that it was 30 hours of natural,” she shared.

Of those thirty hours, Evangeline says a full eight were spent pushing!

Ricki Lake’s documentary about home birth, The Business of Being Born, empowered women everywhere to have unmedicated births at home. She gave birth to her second son Owen, now 13, at home in a bathtub. She talked about her reasons for making the film.

“I wanted to make this movie after my two very different birth experiences with my children,” she said. “I felt like I had an opportunity to explore and question birthing practices in this country and perhaps be an advocate for mothers’ rights and better maternity care.”

On the experience of birthing Owen at home, Ricki said:

“After the birth of my sons, particularly my home birth with my second son, I thought I wanted to become a midwife,” she shared. “Then I looked at all the years of schooling and training that I would have to do and felt that the time could be better spent doing a documentary on the subject of birth.”

Model mom-of-twoCindy Crawford had both of her children – son Presley and daughter Kaia – at home with her husband Rande Gerber and three midwives on hand.

She spoke of the home birth experience:

“I didn’t tell anyone last time because a lot of people are against home birth and tell you horror stories,” she shared. “Even my husband said at first, ‘Why are we doing this?’” But she went on to say her home birth was ‘absolutely surreal.’”