Some say over 40 is too old for pregnancy, while others argue that under 30 is too young. 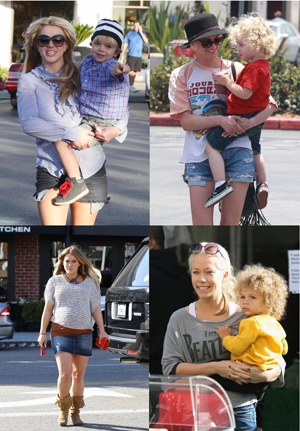 Let’s take a look within Hollywood and see who has entered motherhood in their teens and 20s. From Britney Spears and her sis Jamie Lynn Spears, to moms-to-be Hilary Duff and Snooki, look through our list of 10 young Hollywood moms.

In the worst-kept secret in reality TV history, Nicole “Snooki” Polizzi, 24, recently confirmed that she is pregnant and engaged to the father, beau of one and a half years Jionni LaValle.

And the Jersey Shore star and LaValle, also 24, know just what onlookers are thinking.

“I have different priorities now,” the reformed party girl said. “I don’t care what anybody else thinks. As long as I know I’m ready and he’s ready.”

“I feel like the first pregnant woman on Earth,” Hilary said. “Every time I feel something, I’m like, ‘What is this? What’s happening?’ And I’m Googling and finding out that everyone has had the same symptoms and I’m totally not original.”

The Lizzie McGuire star went on to talk about her first pregnancy.

“Today I got out of the shower and one side of my stomach [was] way bigger than the other side. It was the first time that I saw the baby actually moving in there!,” she said. “It was like I had a little alien inside!”

When pop princess Britney Spears was 22, she wed her second husband Kevin Federline. At the tender age of 23, Brit gave birth to her first child, Sean Preston. Just one year later, theOops!… I Did It Again singer welcomed her second son, Jayden James.

Brit has opened up about how motherhood has changed her life.

“As a mother, the one thing that always goes through your head is, You’re never enough. You never can be enough—or do enough—for your kids,” she said. “It’s a never-ending issue for me. I had to learn: Don’t beat yourself up so much…. You have to take it one day at a time, do the best that you can and enjoy yourself. I notice that if there are some times I’ve been stressed, because I’m human and stress about things, that affects your kids. So you have to make sure you’re a happy mom so they can be happy.”

Not to be outdone by big sister Britney, Jamie Lynn Spears welcomed her first child at the young age of 17. The teen mom and her then-boyfriend, Casey Aldridge, welcomed daughter Maddie Briann in June 2008.

Jamie Lynn recently talked about being embarrassed at the time to reach out for birth control. “I was 16. I’d had one boyfriend. It doesn’t make it perfect or all right,” she said.

“Casey was my first love,” she said. “Since the day I saw him, I just wanted to marry him and be with him forever and ever. I believe in safety and birth control as prevention. But like many young girls…I was really scared to go to the doctor. And I was on a Nickelodeon show, and it [felt] especially embarrassing to ask someone to put me on birth control. I didn’t want to ask my doctor, because she had a little girl.”

The young mom went on to say she never wanted to “glamorize teen pregnancy.”

“When I found out I was pregnant, [my parents and I] decided to do an interview with OK! magazine about it. I knew I needed to give an explanation to my fans, and I wanted it to be in my words first. I had to make a decision that I could sleep with every night. I did feel responsible for the young girls and the mothers who I probably confused and let down. I apologize for that. But I wasn’t trying to glamorize teen pregnancy. I hated when [the tabloids] said that. Everybody is dealt a hand of cards. It was my choice to play them the way I played them. But the hateful comments hurt. [Parent groups were outraged at the Nickelodeon star, and tabloids printed rumors that Spears had a miscarriage, that she was giving up her baby, and that Aldridge was cheating on her.] I was already upset about having to tell my parents and Casey’s parents. To have the world come down on a situation that was already affecting my family hugely was hard. But this was my situation, and I did the best I could.”

On January 6, 2011, Orlando Bloom and Miranda Kerr, then 27, welcomed their first child, son Flynn. In our 4th Annual Readers’ Choice Awards, baby Flynn topped the charts as our favorite new tot in Tinseltown!

[Flynn is] “the best thing I’ve ever done!,” Miranda gushed. “Every day it just gets better,” she added.

At the age of 20, Full House star Candace Cameron Bure wed NHL hockey player Valeri Bure. Candace gave birth to their first child, Natasha, when she was 22-years-old. Their son Lev arrived when Candace was 24, and Maks came along when Candace was 25.

On being a young mom, Candace said she wouldn’t have it any other way.

“Even though I was married at 20 years old and had my first baby at 22, I feel like I lived a whole lot of life before that,” she said. “Both my husband and I were ready to have a family right away. I love being a young mom and taking my kids everywhere with me. I’m blessed to say my kids have traveled all over the world, and we’ve never brought someone along to help with them. It puts my obsession with etiquette books to good use! I also get to see the world through young eyes and do things I might not otherwise because of it.”

The soulful singer opened up about how motherhood has changed her.

“My whole goal in life is to better myself as a person,” Christina said. “One thing I’ve learned is patience. Having a child is a real eye-opener. It also gives you a new sense of beauty, because you feel more centered. I feel a deeper sense of happiness. And it’s funny, I get more done now! I know there’s a limited amount of time for everything now, and that really motivates me to cram as much in as I can in the amount of time I have. It’s made me balance and schedule things better.”

As it turns out, her marriage to Jordan didn’t last. On getting married and divorced young, Christina recently stated,

“Was I too young? Not at all,” she said. “I did the exact right thing at the time… I definitely wasn’t too young. I have always been older than my age.”

Singer/actress Ashlee Simpson married Fall Out Boy bassist/lyricist Pete Wentz at the age of 23. She welcomed her first child, son Bronx Mowgli, when she was 24-years-old.

Ashlee said she has no regrets about becoming a young mom.

“Being a mom’s so empowering and incredible,” she said. “I’m one of those people who believes that life brings things to you at a certain time for a certain reason, and if you just go with it, that’s where the best moments come from.”

After three and a half years of marriage, Ashlee and Pete were officially divorced. Pete said they are on good terms and working together to make home life as “easy as possible” for their son.

Niki has since divorced Martinez and remarried NASCAR driver Burney Lamar. The supermodel welcomed her third child, daughter Ciel, the day before her 34th birthday, and her fourth child, son Rex, in November 2011.

Being a teen parent isn’t something she hopes for her four children.

“I hope they don’t rush into anything and take their time with decisions,” Niki said. “I want them just to be true to themselves and just to do what makes them happy.”

The former Playboy model has no regrets about being a young mom. In fact, she says it has its privileges.

“When the baby sleeps, we have sex!,” she said. “That’s what it is for us. That’s why it’s so cool to be young parents because we have the energy to do that.”