Earlier this month, Kristen Bell and Dax Shepard announced that they’re expecting their first child in the spring. And although they’ve been together for years, the longtime couple are not yet married. 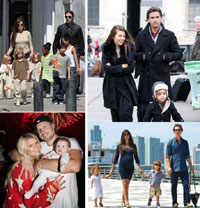 But they’re not the only Hollywood couple to have a baby before the wedding. From Angelina Jolie and Brad Pitt to Natalie Portman and Benjamin Millepied, let’s take a look at 10 high-profile couples that had a baby out of wedlock.

In early November, Kristen Bell and Dax Shepard announced that baby No. 1 is on the way. “They’re so excited — they’re both ecstatic. They can’t wait to become parents,” a friend revealed.

This will be the first child for the House of Lies actress, 32, and Shepard, 37, who began dating in 2007 and have been engaged for nearly three years.

Even with a baby on-the-way, the pair will not tie the knot until same-sex marriage is legal in California.

“We wouldn’t want to invite all of our friends who don’t have that right to celebrate us, who have that right,” Shepard. “We just don’t feel right about that.”

Jersey Shore star  Nicole ‘Snooki‘ Polizzi announced her engagement and pregnancy at the same time. She gave birth to son Lorenzo in August and is still planning a wedding with fiancé Jionni LaValle.

“I want to get married and show my wedding and all my kids, my future kids, husband… the whole thing!” said Snooki.

And it sounds like they’re not in a rush to walk down the aisle.

“We’re gonna go to Vegas [for the bachelor/bachelorette parties],”Snooki said, and admitted they haven’t starting planning the wedding just yet. “Within a year or two,” added Jionni. “You know, first the baby then we’ll take that next step.”

The handsome couple were wed on June 9, 2012, in Austin, Texas. And just a few weeks later on July 4, the Magic Mike star announced they are expecting their third child.

Prior to walking down the aisle, Matthew and Camila shied away from questions about marriage. To deflect reporters, Matthew would often say, “The family that prays together, stays together.”

After her high-profile divorce from musician Nick Lachey, Jessica is in no rush to wed this time around.

“We have not set a date,” the Fashion Star mentor, 32, recently said about getting married again. “It won’t be this year. We haven’t had time! I really want to do a big fun wedding with my friends and family.”

Naomi Watts and Liev Schreiber are proud parents to sons Sasha, 5, and Kai, 3.

So will the longtime couple get engaged and walk down the aisle one day?

“We’ll see,” Naomi said of marriage. “It’s never been that important to me. If it was important to our children, I would do it in a heartbeat. We’ll see.”

Natalie Portman and Benjamin Millepied welcomed son Aleph in June 2011. At the time, they were engaged to be married.

At the Academy Awards earlier this year, the pair were spotted wearing wedding bands on their ring fingers sparking rumors that they had secretly married.

But in August, the couple made it official and were wed in an intimate Jewish ceremony in Big Sur, Calif.

For high-profile couple Brad Pitt and Angelina Jolie, it took years – and six children –  for them to finally commit to marriage.

“We’d actually like to, and it seems to mean more and more to our kids,” Brad said before he popped the question to his longtime love. “We made this declaration some time ago that we weren’t going to do it till everyone can. But I don’t think we’ll be able to hold out. It means so much to my kids, and they ask a lot. And it means something to me, too, to make that kind of commitment.”

And in April, the long-awaited engagement news hit the internet.

“Yes, it’s confirmed. It is a promise for the future and their kids are very happy. There’s no date set at this time,” Brad’s rep stated.

According to new reports, it sounds like Kourtney is pushing for an engagement — and a pre-nup.

“If anyone screws up in this marriage, it will be Scott, not Kourtney,” an insider said. “She’s no dummy. She’s protecting her and her children’s futures.”

In the past, Kourtney has opened up about her hopes to wed someday.

“I’d like to someday [marry] for my children, but I know that I’m just as committed as if I was married or not married,” she said.

Adele and her boyfriend Simon Konecki recently welcomed their first child together, a son, on October 19.

While there’s no word on an engagement for the couple, we know Konecki doesn’t have commitment issues. The entrepreneur also has a 5-year-old daughter with his ex-wife.

The British singing sensation, 24, began dating charity boss Konecki, 38, in late 2011 and she announced their pregnancy news on her website in June, 2012.

Is the pair ready to add to their family before tying the knot?

“We’ve talked about maybe having another baby first so we’ll see,” the new mama recently said about their wedding plans.“I want Camden to walk down the aisle, so it will be a few years yet.”