Thanks to A-list couples like Brad Pitt and Angelina Jolie, Hollywood has put adoption in the spotlight. 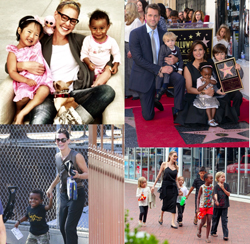 In celebration of National Adoption Day on November 23, we’re taking a look at 10 high-profile adoptive parents such as Hugh Jackman, Mariska Hargitay and Sandra Bullock.

The Biggest Loser star Jillian Michaels and her partner Heidi Rhoades became parents to two children in May: A 2-year-old daughter Lukensia and a newborn son Phoenix.

“About three and a half years ago I began dating my partner Heidi,” Jillian shared on her road toward motherhood. “We had a very easy going, comfortable and no-pressure relationship. And a year or so into our relationship, I decided I want to adopt.”

The celebrity trainer went on to say the adoption process was not easy, and after a year and a half of waiting for a referral from Africa, she switched gears.

“I switched all my paperwork over to Haiti and I get a phone call one day,” she shared. “Heidi is now trying to get pregnant for five months now. They say, ‘We have a referral for you,’ which means they’ve matched you with a child. I was like, ‘This is unbelievable, this is great!’ I come home and tell Heidi, and in less than 24 hours she says, ‘By the way, I’m pregnant.’ ”

Charlize opened up about a letter she wrote at 8-years-old, sharing her plans for a future adoption.

“My mother found [it]. It said, ‘Would you please take me to orphanage, so that I can go and adopt a baby?’ I always knew I would adopt – always,” she shared.

Not only did Sandra Bullock become an Academy Award-winner in 2010, she also become a mom. The Extremely Loud & Incredibly Close actress adopted a New Orleans-born boy, Louis, in January 2010.

Now 3-years-old, Louis has become Sandra’s greatest joy. “He’s just perfect, I can’t even describe him any other way,” she gushed.

Sandra opened up about the first time she laid eyes on her gorgeous son.

“The first time I met Louis, it was like the whole outside world got quiet,” she said. “It was like he had always been a part of our lives. All I said when I met him was, ‘Oh, there you are.’”

The Little Couple’s Dr. Jen Arnold and Bill Klein introduced their 3-year-old son William on the Katie Couric show in April. And just one month later, they had more exciting news to report.

After years of hoping to become parents and suffering through fertility issues, the couple announced they adopted a 19-month-old girl from India they have named Zoey.

“We’re so delighted that Zoey will be joining our family and that William will have a little sister coming home very soon,” the reality TV couple said in a statement in May.

Zoey also has a form of dwarfism like her adoptive parents and brother Will.

“We’ve dealt with prejudice and many challenges,” Jennifer said of her life experiences. “I feel very lucky and fortunate that I have the wonderful life I have.”

A year after being diagnosed with breast cancer, Sheryl Crow adopted her now 6-year-old son, Wyatt. The songstress said she always knew she’d be a mom.

“There was a shift in my life when I got diagnosed, [with breast cancer] because it demanded I look at everything and redefine my life,” she said. “I always felt I would be a mom. I have strong ­maternal instincts.”

The singer went on to adopt a second son, now 3-year-old son Levi.

“I’ve always had maternal instincts,” she said. “And there are so many different ways you can go about that. My sons didn’t have to be from me. They didn’t have to look like me. I just wanted children to love.”

“They have so much energy and they keep me young!” Sheryl recently told Celebrity Baby Scoop. “I wouldn’t change a thing. I love getting to see things through their eyes.”

The Queen of Pop has adopted two children from Malawi – David, now 8, and Mercy, now 6 – and has since spoken about the experience.

“This was an eye opening experience” and “a real low point in my life,” the Like a Virgin singer said of adopting David.

The Material Mom was more prepared for her second adoption.

“When I adopted Mercy James, I put my armor on,” the popstar said. “I tried to be more prepared. I braced myself. This time I was accused by a female Malawian judge that because I was divorced, I was an unfit mother. I fought the supreme court and I won. It took almost another year and many lawyers. I still got the shit kicked out of me, but it didn’t hurt as much. And looking back, I do not regret one moment of the fight.”

Hugh Jackman is happiest, “being with my family, definitely, without a doubt.”

The sexy Wolverine star and his wife, Deborra-Lee Furness, have two adopted children Oscar, 13, and Ava, 8. The hands-on dad said it was a “no-brainer” for them to adopt children in need.

“When we went first to talk to someone in Los Angeles about adoption, I remember, they said, ‘What do you want?’ I said, ‘Well, healthy would be good.’ And they said, ‘Well, what about the race?’ We’d ticked mixed race. And he said, ‘Now, listen. Please don’t, please don’t just tick that because you think it’s the right thing to tick.’ And he said to me, that we turn away children every month who are mixed race, because we can’t find families for them.”

He’s also spoken of the joys of adoption.

“A while back, there was a lot of shame attached to it and parents wouldn’t tell their kids they were adopted,” he said. “What’s great is that the focus is now shifting to the care of the child. We were very fortunate and open – I can’t go into details because of the privacy of the birth parents, but I can tell you it was amicable. Adoption is a wonderful thing to do.”

“I’m working with Americans to create an international campaign to shine a light on the fact that there are 153 million orphans in the world,” the actor recently said. “If that were a country, it would be the ninth-largest in the world, just ahead of Russia.”

Their three eldest children were adopted from Cambodia, Vietnam and Ethiopia — although, Angie said she’s lost track of the details. “I couldn’t tell you in my own home who’s adopted and who’s not,” Angelina recently said.

The Oscar-winner wants her children to one day give back to their homelands.

Law & Order: SVU star Mariska Hargitay and her husband Peter Hermann endured a long and emotionally challenging journey to finally reach their beautiful family of five and now, things couldn’t be better for the happy couple.

“They’re awesome and perfect,” the star said of sons August, 7, and Andrew, 2, and daughter Amaya, 2. “My heart just keeps getting bigger and bigger.”

The actress opened up to Ellen DeGeneres about her surprising second adoption.

Just months after bringing home daughter Amaya after an emotionally trying adoption process, the couple’s lawyer called them to let them know an agency had a newborn boy ready to be adopted as well.

“It was one of those things that we were not expecting at all and my husband and I looked at each other and have never been more sure about anything,” the actress tearfully recalls about their decision to bring home baby Andrew. “This has been a year of true blessings.”

Grey’s Anatomy star Katherine Heigl and her husband Josh Kelley adopted their daughter Naleigh from Korea when she was 10-months-old.

“[Adoption has] been a big part of my life and my family,” Katherine said. “My sister is Korean and my parents adopted her back in the 70s and so I just always knew that this is something I wanted to do.”

Katherine went on to talk about her now 4-year-old daughter.

“She is a special needs baby and because of that it all moved so much faster. They wanted to get her to us as quickly as possible.”

The couple went on to adopt a second daughter, Adalaide, domestically in April. “She’s great! She’s a delicious, beautiful, wonderful child,” the Grey’s Anatomy alum gushed of her new daughter.