Introducing Languages to Your Little One 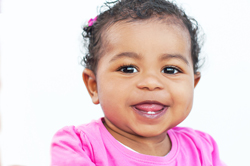 This journey began before our child was born. While pregnant, I was spending at least one and a half hours commuting to work and at
that time I would have a French radio station on, even though I could not fully understand what was being said. I enjoyed hearing the
sounds of such a lovely language and thought that it would make for interesting listening for my unborn child.

At bedtime I would play French lullabies to create a calm atmosphere leading to sleep time. Recent studies indicate that babies begin picking up language while they are still in the womb.

There are numerous reasons to introduce languages to babies. Babies are like sponges, absorbing their surroundings. Scientific studies
have proven that children, especially very young children, have a natural ability to pick up both great pronunciation and intonation when introduced to a foreign language. Starting children early, even before they reach age two, enhances their ability to develop advanced levels of proficiency.

Like many eager mothers, I wanted to expose my child to anything and everything that I believed would be good for him. When our
son was born we decided that we would speak Italian to him almost exclusively. In no time, I had become one of those moms who
would walk around talking to their newborns as if they were talking to their peers. As I would push his baby carriage to the grocery
store or library I was constantly talking to him and if I had nothing in particular to say I would sing him a song. It got even better in the
grocery store when I would ask him how many apples we should purchase and since he was not yet talking I would respond for
him.

When he was just two months old we embarked on our journey of a nursery rhyme baby class. At first, I was skeptical and thought it was a ridiculous and overly ambitious concept. But, when we arrived at our first mom and tot program, Lullabies & LapRhymes, I
realized the benefits — it was as much for me as it was for my baby. This gave me an opportunity to meet other moms and to build
my brain bank of nursery rhymes. We sat in a circle and after a welcoming introduction the gracious instructor, Sally Jaeger, began to
recite her repertoire of age-appropriate material.

After a few weeks it dawned on me that we could be sitting in a similar situation with an instructor doing the same thing but in a
foreign language because, after all, babies are like sponges. Without any delay, I started Multilingual Kids, with an Italian mom and tot
program — by age two my son was speaking both Italian and English.

Now it was time to reintroduce the French to which he had been exposed to as an unborn child. French was very easy for him to pick up. However, when I say we introduced him to French what I mean is that he attended all the French programs I could find for his age group (a mom and tot French circle time, a French craft activity class and a French playgroup). Soon after being introduced to French he quickly grasped the relationship between the various languages he knew and one day ascertained that if in Italian the word for skunk is moffetta then in French it must be mufette. I was astonished to learn that the dictionary confirmed his deduction.

His bookshelf no longer had the shelf capacity for all his English, Italian, and French books. Spanish soon followed and we only slowed
down the pace when he starting his journey of music studies and sports. At age three, while we were shopping, he heard a couple
conversing and quickly asked me what language they were speaking. He had correctly surmised that they were not speaking Italian, English, French or Spanish. He was, like many toddlers that age, intrigued and curious to learn what language they were speaking. Well it turned out they were conversing in Persian. No, we haven’t gone down that path yet, but who knows, maybe one day! He is now 11 and speaks three languages; once in a while we work on the fourth.

Sandra Emilia Calderaro, is the program director of Multilingual Kids — a language program for children from birth onwards. The
program began with the birth of her son, who is a happy, healthy, well-rounded trilingual 11 year old. MLK continues to evolve and expand growing ever more successful. For more info visit www.multilingualkids.ca