To Have or Have Not—A Second Baby Shower 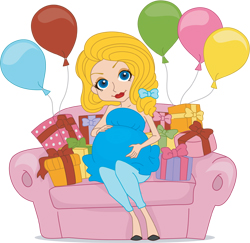 I remember well the day of my baby shower for my first-born. I was feeling humongous and overwhelmed but excited for the cool baby stuff and well wishes given by family and friends. For some reason when I had my second child it seemed much more daunting of a task to procure additional baby stuff and I never got that special “Let’s welcome the new baby” party. More and more second-time moms are deciding to forego the cultural standards of one baby shower and opting to celebrate their second birth in the same fashion as their first. This begs the obvious question: is having two baby showers one too many?

Baby shower etiquette, as with “etiquette” in general, is really a matter of opinion. Robin Elise Weiss, a Lamaze Certified Childbirth Educator (LCCE), believes the negative connotations associated with second showers are largely due to some false perceptions. “People think mom is being greedy,” Weiss says. She also notes that some families have multiple showers for one baby; a work shower, personal shower, etc. so that can lead to further confusion. Despite the nay-saying Weiss says second showers shouldn’t necessarily get a bad rap. “In my opinion every baby deserves a celebration,” she offers.

What some people might be opposed to is the gift giving, twice in this case. There are other ways for the shower to hold significance though and getting away from the gifts might be a welcome change to some guests. Weiss suggests incorporating games, story-telling, food and a real sense of fellowship to avoid the pitfalls of baby shower redux.

Another option for second-time moms is a baby shower alternative. Some mothers choose to celebrate their upcoming births with a Blessing Way ceremony.

This type of ceremony focuses primarily on the expectant mother and welcomes family and friends to extend their advice and good wishes rather than just gifts off of a registry. Many variations on the ceremony exist and though some will incorporate gifts they tend to be more of the sentimental and spiritual variety.

Certainly opinions will vary across generational, regional and cultural boundaries when it comes to what type of celebration new moms or slightly seasoned veterans will have. Whether or not a second-time mom chooses a festivity of any sort, ultimately, the focus of the activity should be clear. Weiss puts it succinctly:  “The shower and/or celebration should be about supporting mom and the new baby,” she advises. While I may not have had a second party, I know I appreciated the muffins and iced coffee after baby number two was born just as much as the outfit I brought her home in.