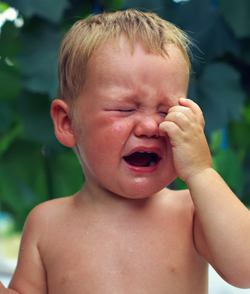 Another day, another parenting theory. You know when you hear the words “Currently taking Hollywood parents by storm” that it’s going to be a good one. And by good I mean one that might involve chewing your child’s food first for them or something like that. This one? It’s based on the book “Baby Knows Best”, a new parenting style, where the babies are not treated like babies, but like adults. R.I.E., or Resources for Infant Educarers.

No high chairs, no time outs, no yelling. No praise, no soothers, and no toys. I thought the “diaper free” parents were a bit misguided – that one is more about the parents being trained to know when the baby needs to pee rather than training the baby, also I’m sure was developed by a laundry detergent company – but this one really baffles me. I believe in autocratic parenting, where Mom and/or Dad are the boss. Given that premise, part of this philosophy actually appeals to me. The building independence, no excessive praise except for a job well done, and not infantilizing a five year old, those ones you see walking around with a bottle hanging from their mouth, or cutting up chicken for a ten year old.

I’m all for teaching kids independence and responsibility – yes that 12 year old can make their own lunch and should have been doing so since age eight – but the idea of trying to relate to babies as adults presumes that the babies will give you the same courtesy back.  Not too many of my adult friends ask me to wipe their bottoms, spit food in my face, or ask to be carried. I would suggest that if you do have friends like this, the most adult thing you can do would be to dump them. The challenge is society frowns on dumping babies if they do the same to you.

Treating babies like adults makes them, in a sense, your equal, which is where I think the theory loses the last of its credibility. In order to raise them, guide them, and (gasp) discipline them, there has to be a clear line of who is really in charge. And if they’re not clear on that as infants, good luck when they get older.

Let’s play this out, shall we? Here’s a real life example: The other day my 11 year old was fighting for something particular for dinner, he had polled the other kids and announced that the vote was 4-2, in favour of the kids. I told him that would make sense if the kids’ votes were actually as important as the adults’ votes, if they in fact counted at all. So really, the score was 2-0.

On the one hand, no other adult in your home would run a vote about what their host was making for dinner, so he was not acting in a truly adult fashion. On the other, as an autocrat, I had no responsibility to bending to his wishes. And I can tell you as someone who also has adult children; their votes don’t count any more than their underage siblings, in my house. Did I mention I’m the boss here?

Of course give your children independence where it makes sense, and allow them to make decisions (and suffer the consequences) where you can. But not at the cost of parental guidance. I’d support a Treat Adults Like Babies theory if it resulted in guilt-free naps in the afternoon. Let’s try that one first, shall we?

Kathy Buckworth is the author of “I Am So The Boss Of You: An 8 Step Guide To Giving Your Family the Business”. Follow Kathy on Twitter @KathyBuckworth and visit www.kathybuckworth.com