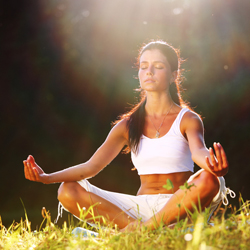 Lori Rimkus dreamed of motherhood, but the journey there wasn’t easy. After several unsuccessful pregnancies, she needed to clear the chatter in her head.

“Am I ever going to be able to have a baby? Why did this happen? Is there something wrong with my body? It just created a lot of anxiety, and it was building up, and I didn’t really know how to deal with it,” she says.

Lori decided to sign up for a unique yoga class, one geared specifically towards women struggling with fertility.

A new twist on reproductive health, “yoga for fertility” classes are part therapy, part gentle and relaxing poses. Over the years they’ve exploded in popularity, both with women who are just starting their journey and those who have been undergoing treatments such as IVF.

Tami Quinn is the co-founder of holistic fertility center Pulling Down The Moon and says many yogis are even working alongside major medical centers. Hers has already teamed up with Shady Grove Fertility Center in Washington, D.C. and Fertility Centers of Illinois in Chicago.

“We found that women were looking for a place to come where they not only could exercise their physical body, but they could come to a place where they would feel support,” says Quinn.

The women that we spoke with say fertility struggles can take a toll, emotionally, physically and financially. They can also be difficult to discuss, even among friends and family. That’s why at yoga for fertility, women are encouraged to share their story. While the thought of sharing made Lori nervous at first, once the words started to flow, she felt enveloped in support.

“No matter what anybody was experiencing, or where they were in their fertility journey, we were all feeling the same feelings. There’s just no way to say how much of an impact that made on me,” says Lori.

Lori says yoga for fertility also helped her channel positive energy and learn how to “let go.” It taught others how to let go, too. At Quinn’s center, a recent-in house survey revealed that 75% of yoga-goers reported a pregnancy within 6 months.

But is there science behind striking a pose? While yoga itself is known to reduce stress, Dr. Samantha Pfeifer with the American Society of Reproductive Medicine says there are no conclusive studies linking stress and fertility. In addition, there are no studies showing that yoga improves fertility rates. Still, Dr. Pfeifer believes that yoga can be beneficial for the mind and the body.

“The whole philosophy of yoga is self-improvement and cleansing and exercise, and focusing on the positive in life. It’s great for weight reduction, for stress reduction, for all sorts of things,” says Dr. Pfeifer.

Lori’s story has a happy ending. She is now the mother of a healthy baby boy and believes yoga played a part in her success story.

“He was the baby I had been waiting for, and it’s really undescribable how you feel when you come to the end of a journey like the one that I have had.”

As always, it’s important to consult your doctor before beginning a brand new exercise regimen.

RELATED: What to do when you’re not expecting