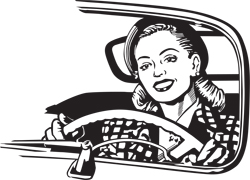 I attended the 2012 North American International Auto Show in Detroit recently, and was pretty impressed with the range of eco-friendly cars that were being unveiled – from the tiny “smart” cars to the hybrids, the electric, and everything in between.  It is of course imperative that we do all we can to protect our environment, and all of the car companies seem to get this, and are investing dollars and research in improving the way they do business, and the way the cars run.

But as a Mom, I often find that the environment inside the car can be just as offensive and polluting as the environment outside the car.  If you have children, I know you agree with me. So, I am providing some helpful advice to the car manufacturers on some features they might like to start developing for 2013.

1) Purse holder for Moms: We don’t want to put our purses down on top of the sticky, dirty floor mats, and if we hand the purse to the teen in the front seat, he’ll throw it in the back (making sure first that it’s unzipped), whacking an innocent younger sibling on the way back.  If we put it in the clean trunk space (let’s assume the trunk space is clean, play along, please) we can’t reach it for the inevitable stop at the coffee shop/fast food restaurant/nice officer with the ticket book in his hand.

2) Sound Barrier: Just a simple sliding glass door between the driver’s row and the back seats would suffice.  On certain occasions (ultra long road trips), having one to separate the driver from the instruction-issuing passenger would also be welcome. You know who you are, Mister.

3) Self-Cleaning: I’m imagining something like the self-cleaning public toilets they have in Europe. The entire car/van gets a shower and drains out of the bottom of the floorboards perhaps once a month. Self-heating/air blowers would help hasten the progress of drying the seats prior to the next infestation. Maybe blow out a lavender scent as well.

4) Cones of Silence: These cones need to be installed over every seat.  The driver needs to tune out the kids fighting in the back; the kids sitting next to each other wouldn’t be able to hear the insults being hurled at them; and Dad wouldn’t hear that child in the back row who just spilled their blue raspberry slushy. Noise pollution is a real thing; and no more real than when you’re subjected to listening to the repeating and inane video game techno-music coming from the eight year old’s latest hand held device.

5) Signal Blocking: Of course the driver should be unable to text or surf the Internet on their smartphones, but if I can’t do it, I don’t want my teens BBM’ing either.  It’s not fair.  Unless I’m the passenger and they’re the ones driving me around, then it’s totally fair.

Now these features would make for a really “smart” car.

Kathy Buckworth loves her Buick Enclave. Especially when it’s toxin (i.e. child) free. Follow Kathy on Twitter @KathyBuckworth. Kathy’s next book, “I Am So The Boss of You” will be released by McClelland & Stewart in Spring, 2013.