By: Mother For Life 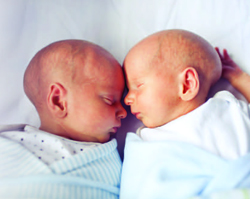 Twice the happiness or twice the nausea? Twice the joy or twice the anxiety? Expecting twins is a very different adventure than expecting only one baby.

There are two little roommates in your uterus. A multiple pregnancy is different from a single one and is often a more “at risk” type of pregnancy because both fetuses’ development have to be monitored. That being said, with a closer monitoring, complications are often avoided and the pregnancy progresses without worries.

Carrying two babies increases the general fatigue of the mother, who gains more weight – and often more rapidly – than other future moms. Because the uterus grows faster during a twin pregnancy, all the problems related to the pressure it creates – like the need to pee more often – occur earlier and in a stronger way. Some women also have difficulty breathing or get out of breath faster.

It is often recommended that women expecting twins rest more. Fatigue or even just going for a walk can lead to early labor. In fact, the closer monitoring is set up to avoid premature births, one of twin pregnancies’ major risks. Some doctors require more ultrasounds (perhaps monthly) to properly monitor the development of babies and detect developmental problems, worrisome positioning or other complications.

Discomforts
In terms of nausea and reflux, there is no explicit data. A multiple pregnancy doesn’t necessarily bring on multiple discomforts. It varies from one woman to another, no matter how many babies she is carrying.

Monozygotic : the fertilization of one egg by one sperm which splits after fertilization and results in two babies being formed. Each twin develops from the identical half of one fertilized egg. They are also known as identical twins.

Dizygotic: Two eggs are fertilized by two sperms. These twins may or may not look alike and really only are two siblings who share the same uterine growing space. They are also known as fraternal twins.

A vaginal delivery is possible if the mother and the babies are healthy, and if the babies are well positioned. It is often a longer birth process than for single deliveries. Some doctors prefer to do C-sections if the babies are not properly positioned, if they are born prematurely and their hearts need to be protected from too much work, or if there’s any kind of emergency. A multiple delivery requires the intervention of a large medical team to make sure that everything goes well, which can unfortunately cause more stress to the mother!

It’s also possible for the first child to be born vaginally and the second one by C-section (if the expulsion of the first one changed his position, if he doesn’t seem to be ready to come out or if he’s in fetal distress, for example).

Statistics
• Every year, more than 4,000 twin couples are born in Canada.
• Every year, more than 100 multiple births (triplets, quadruplets and quintuplets combined) occur in Canada.
• Almost half of twins are born prematurely and/or have lower birth weight.
• Babies from multiple births represent 2% of Canadian births and 16% of lower birth weight babies.
• Twins represent 1 out of 90 births (without fertility treatments)
• Triplets represent 1 out of 8,100 births (without fertility treatment)