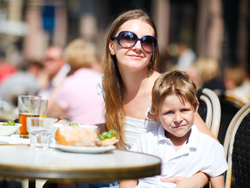 I think North American women are ready to put up an “arret” sign against the recent barrage of  books by French femmes who are writing about how they drink champagne, eat foie gras and don’t get fat; bring up beautifully behaved children simply by setting out a few non-negotiable ground rules,  get those same children to eat anything (only at prescribed times), and how they simply don’t allow pregnancy and childbirth to disturb their bodies, their clothing size, or their lifestyle. They would have us believe that instead of yelling at kids to turn off the television, finish their homework while heating up a frozen dinner and tipping forward that white wine box in the fridge, that a typical French evening is spent at an outdoor bistro, with their well-dressed and charming progeny quietly entertaining themselves, eating haute cuisine without complaint, and participating in meaningful yet respectful dialogue. In fact, the tranquility of their evening would likely only be interrupted by the whining and misbehavior of the  demanding and obnoxious American (or Canadian – who can tell – or cares) at the table next to them, in their baggy t-shirts showing their sports team loyalty, their low slung pants and their plastic gardening shoes, repeatedly requesting ketchup in their increasingly loud English voices.

I’m in Paris right now, sitting at a bistro, carefully observing a Parisian Mom, sitting at an outdoor café, with her two young daughters, fresh from school pick up. While they are all beautifully dressed, and sitting quietly, there are some details which don’t go unnoticed by me. One of the girls has a hot chocolate, topped with elaborate whipped cream in front of her, while her sister flips through a graphic novel and repeatedly kicks the leg of her mother’s chair. I observed Le Mom herself having a glass of rose and catching a quick cigarette. Not judging, just noting, of course.

Back at my hotel room, at least eight of the 20 channels are taken up by children’s programming, leading me to believe that there is indeed a market here for early morning and maybe after school television for children as well. Noted as well.

I put deux plus deux together and come up with this:  could it be that the French are (gasp) sort of like us? Could it be that the hot chocolate is their Oreo cookies and milk, that their graphic novels are our unconnected iPads and that Mom grabbing a glass at an outdoor café isn’t really doing any different than the quick chardonnay we throw down while making (a crappy) dinner? Is there a French equivalent of Phineas and Ferb? Doesn’t the smoking, in one single stroke, wipe out any superiority feelings about parenting they might have?

Perhaps. But perhaps not. After all, that Mom did get to have that glass served to her at an outside cafe in Paris, instead of serving herself from a box in her sticky fingered fridge. Maybe all we need to do to embrace the French lifestyle is to turn that “arret” sign into a “Go”, as in Go to the Bistro. Vite.

Follow Kathy on Twitter @KathyBuckworth, and visit www.kathybuckworth.com for more articles and information. Kathy’s newest book “I Am So The Boss Of You” will be hitting bookstores everywhere in Spring, 2013.