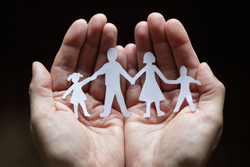 Make no mistake though, Carol and Mike worked hard to blend this family of three boys and three girls when the cameras were off.  It wasn’t always hearts and flowers with the Brady Bunch.  There was that time that Greg broke Marsha’s nose.  Now there was some serious friction within a blended family.

And, we can’t forget about Eight is Enough.  Poor Tom lost his wife and then married Abby.  But, let’s be realistic here, who is crazy enough to marry a man with EIGHT children?  Well, other than me?  And oh, that Tommy was not happy having Abby as a step mother.  After all, she was his tutor and Tom marrying her was almost like he was marrying the nanny.  Now, Abby had a hard time blending into this tight knit group.  But, she persevered and eventually, they all lived happily ever after, at least according to the reunion shows.

But, reality is not television.  There are no scripts, directors or wardrobe people when two families merge into one.  And, yet you still have those that seamlessly mesh without even a ripple on the surface.  How do they do it?  What is their secret?  Are their children better adjusted?  Are they better adjusted?

From my own experience, it was a nightmare.  Of course, I did marry a man with seven children, ages 14 – 3 years old, and had all the best intentions of a woman in her early 30’s who had never been a parent before.  My goal was to win over the ex-wife and the kids with my wit, charm and love.  It didn’t work out so well.

You see, no one told me about angry ex-wives and bitter children that were being alienated.  No one warned me how hard it was to get to know children that were standoffish on a good day and barely civil on a bad one.  No one helped me deal with an angry ex that would egg the children on in being disrespectful, laughing at their antics and saying, “You go, kids!”

And, this is just one extreme of the rainbow colored spectrum of step-parenting and divorce with children.  Very rarely will you run into a natural mother who does not hold some resentment and anger towards the ex husband that does spill over onto the new wife, and when the children are young, the jealousy of another woman taking care of your young ones can be smothering.

Is there a way to avoid this?  That all depends on the two women involved.  By letting the natural mother know that you are really just looking out for the best interest and happiness of their children, and don’t intend on being the mom, it can work, but younger children need more care and attention.  You can either be like a mom or like a nanny, and who wants to be a nanny, when let’s face it, you are really more like a mom?

It is important to remember that unless you have custody of these kids, you are not the mom.  And, you should defer to the mom because it does promote the peace.  As the mom, here is a hint for you.  Let go of control.  Be happy that your ex married someone who wants to take care of your young ones and love them like they are their own.  Children can’t get enough love.  And, when the green eyed monster rears its ugly head, say it again, children can’t get enough love.

From my own experience, it does not always end up as a happily ever after, and no matter what you do, you may always be wrong, but keep persevering.  If your spouse is on your side, you will always win, and although it may be difficult, as the children get older, they will remember your kindness and love, no matter what they are being told.

I focus here on women because men are different animals.  They don’t hold the same types of emotions or insecurities about their children being raised by other men.  And, if they do, then they keep it on the down low.  And, not all divorces are acrimonious and not all steps have issues when it comes to raising their bonus kids.  For those women and men that trudge through the mud that is thrown on them and at them from their spouse’s children and natural parent, I salute you.  Those women and men that make it to the other side, while dancing over hot coals, you have my utmost respect.

His plus yours does not always equal ours and life is not a sitcom.  But, when it does, I have seen the amazing and beautiful families that have melded together.  And, as a good friend said, these are bonus families.  And, as we know nothing is better than getting a bonus at the end of the day.

Lee Block is a multi-talented, twice divorced mom of two who saw a need in the post-divorce community and created a family of sites centered around fulfilling that need.  Lee has successfully launched The Post-Divorce Chronicles, Lee Block.Com, and The Post-Divorce Dating Club, all within a matter of months. Lee writes for the Huffington Post and was recently recognized by Startup Nation as a Leading Mom in Business in 2011.