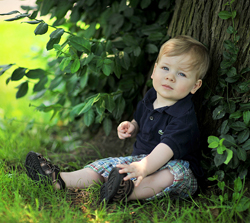 Autism is puzzling; puzzling because no one can figure out what exactly is causing this disorder and puzzling because it can affect each individual so differently. That is why it can be so confusing for parents to try and figure exactly what is going on with their child prior to being diagnosed with autism. When it comes to diagnosing autism, a lot of the responsibility falls on the parents to recognize that something is not right and then have the understanding and courage to do something about it.  This is what I experienced as a mother of a three year old with autism. Although each child’s journey with autism is unique, I hope sharing my story will help shine a light on what parents need to watch for.

My husband and I welcomed our first child into the world on July 12, 2008; our son Brady. He was perfect in every way and we were eager and excited first time parents. I was determined to breastfeed and this dominated my life for the first couple months. That and the lack of sleep that most parents  of newborns experience. I was lucky with Brady; he was a fairly easygoing baby, very little crying, liked being held and slept pretty well. The only complaint I had early on was that he wasn’t much of a daytime napper. Just little half hour catnaps here and there.

I started noticing around the three to four month mark that Brady didn’t have very good head control and that he had a hard time pushing up on his tummy, but at this point I wasn’t overly concerned. He was developing into a very happy, smiley little guy. At around the five to six month mark Brady started having some gastro-intestinal problems. During this time Brady was only consuming breast milk and no solid foods yet, and he was going long stretches of time without having a bowel movement. At one point, he went as long at 17 days. This was obviously very concerning to us and we made several trips to our family doctor. We got him going again but it was not easy and it was an ongoing issue.

Shortly after this Brady started developing hives. He would get them all over his body and they would come and go during the course of the day/week. There was no obvious correlation between the hives and anything he could possibly be allergic too. He continued to get hives until shortly after his first birthday when they mysteriously just disappeared. Brady also developed some quirky behaviours between the ages of six to 12 months. He liked me to put lots of pressure on his feet while he was nursing and he would take my hand and place them on his feet over and over again. At the time I thought this was really cute but now I see that it was filling a sensory need that he had. Another quirk was that he went through a stage shortly after we started introducing baby food where he refused to swallow what was in his mouth and he would just hold the food in there for what seemed like an eternity. I was really baffled by this at the time and I believe now it may have been the case that he really wasn’t aware that the food was there and/or he wasn’t sure how to co-ordinate the steps involved with swallowing the food. One other major quirk he had was that he loved to put toys up onto his feet while lying on the floor. I was amazed at what he could balance on his feet and a bit concerned that it was a somewhat dangerous skill to have mastered.

When Brady was approaching the one-year mark I was really starting to get concerned. So many things were not adding up. I knew what other one year olds were doing and what milestones Brady should have met by now and the majority of these had not occurred. Never mind crawling or walking, at a year old he was not able to pull himself up to a sitting position, although if we sat him on the floor he could sit just fine. Even more concerning was that Brady was making no real attempts to communicate verbally. He did some babbling here and there but that was about it. He would play with toys but mainly ones that would light up or play music. He also loved looking at books. To keep me guessing he could be very engaged and he was very smiley and giggly. It wasn’t all doom and gloom by any means.

At Brady’s 15 month well baby appointment it was clear to us and to the doctor that things were not adding up and it was time to start digging deeper into what was going on with Brady’s development. At this point he was able to crawl but he was still not verbally communicating with us at all. He didn’t point to things to try to get what he wanted. He played with toys but not in the appropriate manner and he was able to entertain himself playing with the same toy/book for extended periods of time. The one thing that prevented me from believing he had autism, because trust me by now I was thinking it, was that he was so happy and somewhat social. It was confusing to us and to the doctors that Brady had dealt with up to this point. I was somewhat fortunate that the doctors I dealt with during this time, which included our family doctor and a pediatrician/allergist that we were referred to, listened to what we were saying and they took steps to get him properly assessed. I have heard a lot of stories of parents who had some concerns regarding their child’s development at the 12-15 month time frame, however their doctor(s) would simply reassure them that things would be OK, instead of dealing with the issues. Even though Brady’s doctors referred him to the necessary services promptly, they did try to downplay what they thought was going on, and they never said to us they thought it was autism. I think it’s really hard, even for doctors, to tell parents that kind of news. This is when you really need to believe in the concerns that you have because most people will try to reassure you that everything is going to be OK.

Brady started receiving therapy for his developmental delays at approximately 18 months of age. This included Speech/Language, Occupational and Physiotherapy. He did not get his diagnosis of autism until he was two years and three months old. During this time, it became very apparent to us that Brady had autism.

He starting walking at around 18 months but he was very clumsy and uncoordinated. He never did develop any language skills but did take to pulling us by the hand to what he wanted and/or touching our mouths when he wanted us to read a book to him. In addition to not verbally communicating, he also did not reciprocate when he was spoken to; that is he didn’t look when you called his name and he didn’t follow any verbal commands. His play skills pretty much flat-lined and he really only enjoyed watching TV, listening to music and looking at books.

Brady is now three years and nine months old and he has been a busy little boy for the last year and a half. Since his initial diagnosis of autism he has seen a number of specialists which included a Neurologist for genetic testing and an MRI, another Developmental Pediatrician who provided a second option, again of autism, an Audiologist to check his hearing, an Ophthalmologist to check his vision, a feeding and swallowing specialist, and a dietician. He has weekly appointments with his Speech, Occupational and Physiotherapists and has been doing nine hours of private therapy called Intensive Behaviour Interventions (IBI) for approximately a year and a half. This form of therapy, when started at an early age, has been proven to be very beneficial at minimizing or eliminating the symptoms of autism. He also attends nursery school two mornings a week, with the help of a Resource Teacher.

In the coming years we have school to figure out, which we anticipate he will be attending with the help of an Educational Assistant. Brady is also currently on a very long wait list for IBI therapy provided by the Province of Ontario. Children must be assessed and meet certain criteria to qualify for this therapy and once approved wait an average of three years before the program begins. Once in the program a child receives approximately 23 hours of one-on-one therapy. Aware that research shows the key to ultimate success with IBI is starting early, we went ahead and started Brady in private therapy. It’s only nine hours a week versus the 23 hours he will get through the provincial program, but it’s a start. Unfortunately this therapy is quite costly and therefore out of reach for a lot of families.

As a mother of a child with autism it can be challenging. I have to wear a lot of hats and usually more than one at a time. Managing all of Brady’s appointments and the paperwork these appointments generate is a job unto itself. Trying to manage all of this and work full time has not been an easy feat. My husband and I have attended countless seminars and programs to teach us how to work with Brady at home. Trying to find the time and energy to spend as much time as possible working with Brady using all the skills and techniques that we have learned is no easy task either. This for me is the greatest responsibility to deal with, and I often beat myself up feeling that I didn’t spend enough quality time each day working with him. Brady is on a special diet that is free from gluten and casein (dairy) and we prepare specific meals for him. Many children with autism have fewer autistic symptoms when they are on a diet like this and we found this to be true with Brady. Many children with autism also tend to have sleep disturbances. Brady is affected by this and he often has trouble falling asleep and/or staying asleep through the night. Most nights, usually between the hours of four and six am, Brady is up. This usually involves me or my husband going in to change his diaper (he is not potty trained) or his entire outfit if his diaper has leaked, giving him a bit of water and singing a few songs to him. Then it’s back to bed (he is still in a crib, for safety reasons), where he entertains himself looking at books until he falls back asleep.

In addition to being a mother of a child with autism, I am also a mother to a very lively 23 month old named Zachary. Zachary’s development has been as typical as we could have hoped and we have had no concerns with his development thus far. He is already my little helper and is very loving with his big brother Brady.

Reflecting upon the last three and a half years, it has been a pretty crazy journey. It hasn’t always been easy and at times it has been completely overwhelming, but at the end of the day we have been blessed with the most beautiful, sweet and happy little guy. I look at him and I see such potential and I know that regardless of what obstacles he has to overcome in his life he will always have the most loving and supportive family to help him along the way. Dealing with everything that comes with a diagnosis of autism has made us closer as a family and forced us to slow down and to appreciate the smallest of accomplishments. For that I am grateful.