A Royal Pain, In The Class 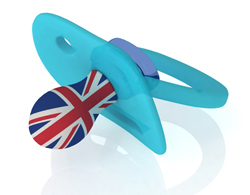 Prince George has arrived. From the moment it was announced that Prince William’s wife Kate was expecting their first child, and third-in-line-for-the-throne-heir, many moms and the media have struggled to find commonalities between their new baby experience, and everyone else’s.

The thing is, there’s nothing common about Kate’s life, anymore. From having to appear in front of millions of people one day after she gave birth, being subjected to comments and criticism about her outfits, the way they positioned the baby in the car seat, and whether or not her real prince will be one in the diaper changing department, Kate will experience everything a new mom goes through, but with a royal spin.

For instance, Kate, like most women post-partum, will find that much of her hair will likely fall out during the first few months after giving birth. However, unlike most new moms, she could buy Detroit (and maybe BlackBerry) with the money she would make selling it on eBay. She’ll also have the services of a royal hairdresser to keep her perfectly coiffed at all times. Do most new moms even know where they put that hairbrush down? (Check the fridge.) One suspects Kate will also have time to shower everyday, something that also plagues her greasy haired counterparts.

But it’s not just during the infant and post-pregnancy stage where Kate will have different hurdles. Everyday challenges a new mom faces will always have a slight variance for Kate, as the years go by.

Potty training days will bring new meaning to the term “sitting on the throne.” And while most babies are congratulated for speaking their first word, the first royal wave will also have to be celebrated. Come birthday time, George asking for a pony will likely be a little redundant.

For William, “Bring your child to work day”, which doesn’t typically happen until the child is 14, will need to begin pre-planning now due to the security detail involved. And there’s really no point to Baby Wales taking Daddy in for Career Day, as no other kid in the class will be able to aspire to have the same “Next in line for the throne” job.

Instead of sitting in line for hours to sign their child up for swimming lessons, they will have to spend hours interviewing the Royal Swim Instructor. Likewise the Royal Soccer Coach, Royal T-Ball Trainer and Royal Lice Remover. Should their child get lice, they can force everyone around them to cut off their hair. This, history tells us, is a vast improvement over ordering a whole head to be cut off. And do you want to be the Teacher that has to tell Kate her son thinks that HE is running the class? (He is, shhhh.)

But I think the biggest parenting challenge Kate will face, that none of us have to (although some of us surrender to), is via Prince George’s predetermined career path. Technically, and hierarchically, he is literally, The Boss of Her.

Kathy Buckworth’s latest book “I Am So The Boss Of You: An 8 Step Guide To Giving Your Family The Business” has been optioned by Warner Brothers Television. Visit www.kathybuckworth.com and follow Kathy on Twitter @KathyBuckworth