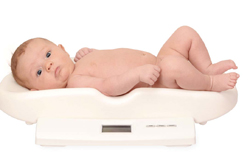 Most babies have similar growth rates. Their physical development is noted by the paediatrician with a growth chart.

This growth chart is a reference point that allows you to check how your baby is growing compared to other children of the same age and gender.

However, you must remember that your child has his own growth rate. Don’t panic if your child has a low weight at birth or if he’s born prematurely and has a slower growth rate than other babies his age. Usually, he will catch up by the age of five.

When evaluating a baby’s growth, three important things are measured: weight, length and head circumference. These numbers are then represented on a growth chart that helps doctors see how kids are growing compared with other kids of the same age and gender. They also allow heath care professionals to see the pattern of kids’ height and weight gain over time, and whether they’re developing proportionately.

Your baby’s monthly growth should be around:

After that, the child should gain about 1.8 kilograms to 2.3 kilograms (four to five pounds) during his first and second year of life.

At four to five months of age, your child should have doubled his or her birth weight and tripled it by his first birthday.

How often should my child be weighed and measured?

If possible, have your child weighed and measured:

What else are growth charts used for?

Growth charts can also provide important clues to evaluate the gravity of certain problems or symptoms. For example, if a parent thinks that his child is not eating enough or is a picky eater, the doctor will check his evolution on the growth chart. If the growth rate is normal, it’s very possible that the child is getting enough calories to grow even if he’s a picky eater.

In case of illness, or in the presence of symptoms, the growth rate (normal or abnormal) will give important information to the doctor.

To check if your child is drinking enough milk, you can count the number of wet diapers in a day. A week after birth, your baby should wet about six diapers in a 24- hour period, or three diapers to a minimum.

The baby’s stools will go from black (the first stool is called meconium) to brownish and then yellowish. A baby can make three to four stools a day, and during his first month of life, your newborn will gain 20 to 30 grams per day.