What the Classes and Cows don’t tell you about Breastfeeding 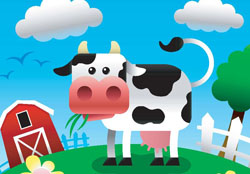 As my husband and I prepare for baby number two, we are once again faced with the decision of whether to breastfeed or formula feed. While weighing the pros and cons of both and ultimately deciding “Breast is Best,” I find myself reflecting on my nursing experience with baby number one. I’m not going to sugar coat it…my first experience sucked!

Before my daughter was born, I made the decision that I was going to breastfeed. Since the beginning of time women have nursed their babies, not to mention every other mammal in the animal kingdom, and of course, all of the research says breastfeeding is the way to go. There are SO many good things about it! Besides, as the daughter of a dairy farmer, I felt I knew the inner workings of lactation, so why not right? How hard could it be? Off I went to my pre-natal breastfeeding classes where I was a star pupil – A+ for me. I knew all about oxytocin, milk letdown, colostrum and the dreaded mastitis! I, along with the other mommies-to-be, watched videos, listened to presenters, looked at diagrams and received copious amounts of literature on the topic. I was PREPARED!!

My sweet little baby was born ready to rock and roll with the whole eating thing, so away we went and HOLY JEEZ!!! I have a newfound sympathy for the first-time heifers in the barn that kick the milkers off!

What my classes, other mommies, midwives, lactation consultants and the cows in the dairy barn failed to mention is that in the beginning breastfeeding can really SUCK and is often painful. I have concluded that people who are real hardcore nursing advocates leave out these little details about the process in favour of “puppies and kittens” if you know what I mean. If someone tells you something sucks, but then asks you to do it anyways, would you do it?

Probably not. So, instead, they only tell you about how wonderful it is and what a joy it is to nurse your baby. In pictures you only ever see smiling women and roly-poly babies happily nursing away…many of these photos are also taken in a hospital room where the mother has presumably just given birth. My question is where are the pictures of that firsttime mom cringing and grinding her teeth with tears running down her face while she tries to nurse her newborn babe as it chomps away like a little barracuda? Or how about the one of the poor mom with boob all the way up to her eyeballs as her milk comes in and poor baby can’t keep up? What about the babes that cut teeth at three months and like to use mama’s boobies as teething rings? Where are these posters and why aren’t these topics covered in class? Nothing is ever mentioned about these scenarios, yet every mother I have talked to has had experiences similar to these.

One other annoying omission? All of my books also imply that mastitis is something incredibly rare, or as you other dairy farming girls out there know, something cows get…well apparently it is far more common than the literature lets on and since my bout with the nasty bug, I have met a number of women who say, “Oooh!! I know how that feels!”…WTH!? So much for rare! Nursing mommies beware!

I absolutely believe that breastfeeding my baby is the number one way to go, which is why I set my goal of six months and stuck to it. For me the pros far outweighed the cons, but I can honestly say that I didn’t “enjoy” it and if it weren’t for people encouraging me to stick with it, I would have given up long before the six-month mark. That being said, I am keeping an open mind and 100% plan to give breastfeeding another go with number two. I’ve pulled out my literature and signed up for another class as a refresher. They say that every baby and every nursing experience is different…here’s to hoping!

My intention with this is not to persuade anyone one way or the other, but rather to paint a more realistic picture for all the mommies-to-be out there preparing to nurse. If you choose to breastfeed: Awesome!! Maybe you will be one of the lucky poster mamas who loves it from the get-go and has no trouble at all. Kudos to you! But, for those of you that find yourselves sitting in your comfy gliders at two in the morning, cursing under your breath, just know that while it might be tough, it’s normal…anyone that tries to convince you otherwise is full of crap! (Cows really DO kick the milker off for a reason) Hang in there and just know that you are not alone! If I can do it you can too!

One final tip for the road: Purchase the nipple cream before the little one arrives and pack it in your hospital bag…you will need it!

Jenn is a twenty-something country girl born and raised on a dairy farm in rural Ontario. She is currently the editor and coordinator of “The Link” – a quarterly magazine put out by the Ontario Holstein Branch. Jenn is an avid photographer and also enjoys documenting her tales of being momma on her blog: Tales of a Modern Mama in the Country. She is married to her favourite dairy farmer, Carman and they are the proud parents of Madelyn (two) and Callum (two months). A so-called “Millionaire’s Family” – minus the millionaire part…they are farmers after all!