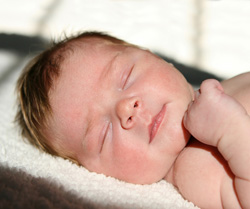 Two of my kids had jaundice. My firstborn was diagnosed while we were in the hospital and he wasn’t “too” yellow. The doctors put a light blanket under his sleeper and a couple of days later he was “pink” again. I wasn’t worried, as no one else seemed to be.

My third was a different story. In Holland you can be sent home hours after you’ve given birth which was the case for me. I entered the hospital at 10:30am, birth at noon, home at 3pm. All was well, her score was good and I was “fine”. But the next day I noticed that she was quite yellow as did the midwife that had come to check-in on us. We needed to go back to the hospital immediately. She was put in intensive care, which meant away from me. I was devastated, hormonal, milk overflowing and without my daughter. And I was worried.

Luckily she reacted well to her light therapy and was home after three days in the hospital. She’s still, at age five, a beautiful “pink”.

Here are some of the Questions & Answers from my book: Babies 0-6 months, about those first weeks.

My baby has a yellowish tint to her. Is this normal?

This yellowing of the skin is called jaundice and it affects more than 50% of newborns. Jaundice appears in the first couple of days on the face then on the body and usually disappears on its own during the first weeks. It can also be worse in breastfed newborns in the first days so be sure to feed very often to maintain hydration. Depending on the severity, it may be necessary to stay in (or go back to) the hospital so that your newborn can be given a type of light therapy (phototherapy) treatment.

An excess of Bilirubin, which is normally taken out of the body by the liver, causes jaundice. In utero, the mother’s liver did the job but after birth it can take the baby’s liver a little time to catch up and take over the process during which time jaundice can occur. This type of jaundice is called “physiologic”. It can also develop in the second and third week in breastfed newborns via a different mechanism. See a doctor but keep breastfeeding. If you are at home and concerned, see a doctor immediately as untreated jaundice can be dangerous.

Are some newborns more prone to jaundice than others?

Yes, if they were bruised when they were born or if they were premature babies their liver isn’t as developed. If their blood type is different than mommy’s blood type (which is a big cause of babies actually needing phototherapy) or if you are breastfeeding and don’t have quite enough milk in the first days, your baby can get dehydrated which can also cause jaundice. Don’t try to figure this out yourself though, see a doctor.

Lianne is a Canadian mother of four, entrepreneur and author of Lianne’s Quick Guide – for the busy woman. Her first title is called Babies 0-6 months and can be purchased directly from her website: www.liannesquickguide.com. She lives & works just outside of Amsterdam and can usually be found biking around on her bicycle built for six.