What goes up doesn’t necessarily always come down… 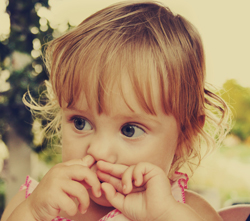 There’s a dangerous trend on the rise among preschoolers.  Forget obesity for the time being.  Forget bullying.  I’m talking about noses.  Or nostrils, more precisely.  What possesses kids to stick things up their noses, anyway?  It’s as though they wake up one day and say, ‘Hey, what are these strange holes doing on my face?’  The answer: to shove things up, obviously.  Well, it seemed like a good idea at the time…

But it’s no laughing matter.  In the past couple months alone two kids I know have had Nose Incidents, and spent an inordinate amount of time in Emergency Rooms where doctors have tried to excavate a foreign object.  The most common offender is the garden pea.  Perfectly sized, the pea seemed destined to travel up a toddler’s tiny nostril.  And yet, for a puny little thing, it can sure do a lot of damage.  One friend lost hours of her life trying to rescue an errant pea from her son’s nose.  Fortunately surgery wasn’t necessary in his case, yet it does happen.

With another friend the inhaled culprit was less likely: a segment of tangerine.  It was the usual story — my friend took her eye off the ball for a split second and presto! The disappearing act was complete.  The parents used tweezers and fiddled around for an hour before deciding they needed to call in the troupes for assistance.  Even the E.R. nurse had a go, and failed.  The boy, who became increasingly agitated as the tangerine was lodged further and further up his nasal passage, was ultimately given a sedative.

Eventually the rogue citrus piece found its way out.  (The trick in some cases is to blow up the unobstructed nostril, as if performing some kind of reverse CPR.)  My friend then posted photos of her misadventure, dessicated tangerine, blood-encrusted nostril and all.  Let that be a cautionary tale to all those moms out there who were otherwise complacent about tangerines…

Later that same evening, as if by telepathy, it was my own son’s turn.  Being the clever illusionist I am, I had just cut up some yellow beans and mashed them into his potatoes.  But the little green pods inside the beans proved too tantalizing for him to resist.  Up the nostril they went.  Luckily I was onto him.  Still, I had to rescue more than one pod that night, and thankfully (having used my Stern Voice) my son hasn’t attempted to stick anything else where the sun don’t shine.

What’s next? If not stuffing, I suppose it’ll be picking.  What else are nostrils for?

A phase, sure. Kids have lots of them.  Grey hairs, I get lots of them these days. They say not to worry, but how can you not, when even something as innocuous as a tangerine poses a very real threat to your child’s safety?  Lately I feel like the Bush administration, finding fear and danger everywhere, in every little thing.   I need to get a grip, I know.

Julie M Green (aka Little Green Mom) is a novelist and freelance writer who rants and raves about all things mommy at Littlegreen1.com.  She lives in Toronto with her husband and two-year-old son, Jackson.  Visit www.juliemgreen.ca or follow her on Twitter @juliemgreen.