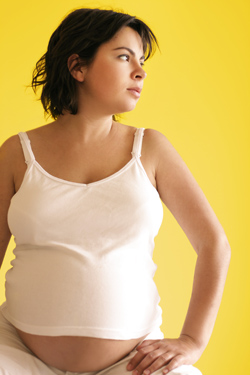 But for pregnant women who have sidestepped around early life infection, being exposed to the virus during pregnancy could potentially put the baby at risk for complications.

“There’s a slight, two per cent risk that your baby will get something called Congenital Varicella Syndrome (CVS) if infected between 13 and 20 weeks of pregnancy,” says Myla Moretti, MSc, PhD(c) Assistant Director of the Motherisk Program at The Hospital for Sick Children in Toronto. “But because 95 per cent of women in North America are immune to the virus through a previous infection, it’s uncommon.”

The effects can be serious and can cause developmental delays in babies who are infected while in utero including intrauterine death, skin scarring, slow bone growth, deformed limbs and vision problems.

“If you are exposed to the virus and you know you are not immune, you could be given the Varicella-zoster immune globullin shot (VZIG) to decrease the severity of the infection,” says Moretti. “Or they may try to delay delivery so that mom has some time to build antibodies which will be transmitted to baby.”

The VZIG is not a concern during pregnancy because it’s an antibody that your body would produce naturally. However, it doesn’t guarantee full protection for the baby.

The risk doesn’t end there. Women are at greater risk of developing Varicella pneumonia – a potentially life threatening aftereffect of the chickenpox virus. So what is a mommy-t0-be to do?

Because the virus is visibly undetectable in its most contagious state, whether or not you have come into contact with the infection is usually not known until it is too late to administer the test for antibodies.

A study by Motherisk, “showed that 70 per cent of those with a ‘negative history (of ever having contacted the disease)’ were in fact immune.” People forget. And because the experience of someone ever having chickenpox is right up there with the memory of their first birthday, Moretti urges everyone to get their immune status checked immediately.

If you think that you may have been exposed to the virus, Moretti urges that you go to the doctors for the VZIG shot within three to four days of coming into contact with the infected.

Motherisk is a clinical, research and teaching program that provides information to women about risks of exposure during pregnancy or while you are breastfeeding. For more information visit motherisk.org.