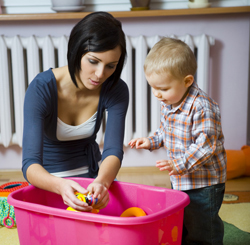 In the corporate world we all know how frustrating it can be to hear an employee mutter the words “But that’s how we’ve always done it.” With any luck, however, it can be the motivator that causes at least one person in the boardroom to take the initiative to see if they can change how it’s always been done, for the better. While it’s not always possible, great innovations can grow from creative thinking and small alterations.

So why is it then, that in our personal lives, we routinely accept the status quo and don’t invoke our own inner employee voice to challenge the way we’ve always done things?

When Netflix announced that they would be running the New Year’s countdown clock all day on December 31st, so that parents could trick their kids into having celebrated New Year’s before midnight, I commented on a Facebook page that an alternative might also be to tell the kids they’re too young to stay up, and send them to bed on time. This, of course in line with my general “Because I said so” attitude towards my kids, as documented in my book “I Am So The Boss Of You. I was surprised and a bit saddened to read a response to my comment which read, somewhat defensively, “Maybe some of us have kids who won’t listen.”
A) How does this happen (after all, these are theoretically children who are young enough to trick about time of day) and;
B) Make them listen and if they don’t, you are still the boss and you can still send them to bed, when you want.

If we expect our children to not listen to us – whether it’s going to bed, eating a meal or not hitting their brother – then I’m going to guess that, surprise, they’re not going to listen to us. By the same token, if in the work world we expect our employees to keep doing the same things over and over again, in an inefficient way, that’s exactly what they’re going to do. Because they think that’s what we want. They haven’t been told otherwise.

I know, I know, I’ve worked corporate for a long time, and it can be frustrating to hear a new employee challenge old ways, thinking that no one that came before them ever challenged the status quo. But that was then, and this is now. Systems change, people change, new ideas can suddenly make sense, and without the constant pushing of new ideas, innovations and progress can be stifled.
Albert Einstein famously said that the definition of insanity is doing the same thing over and over again and expecting different results. Not expecting your kids to listen, because that’s what you’ve always experienced, is not the way we move things forward. In fact, it drives us a little bit more insane.

A friend of mine, after spending over a decade at home with her children, recently landed a part-time job that she could mostly do from home. “I can still wear my pyjamas all day!” she joked.  Note: People shouldn’t joke about things like that, around me. “Of course you CAN,”, I said, “But you shouldn’t!” What better time to change things up, then when starting a new chapter in your life. Feeling like a professional goes a long way towards being professional. Make 2015 the year you challenge yourself to change the things you’ve always done. Get yourself out of those pyjamas during the day, and get the kids into them, earlier, at night. After all, nobody ever motivated anyone with a hearty cry of “You status quo, girl!”