The Love That Dares to Text Its Name 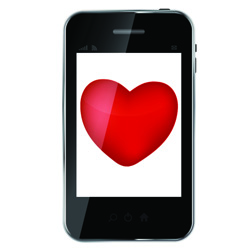 Love is in the air. Being electronically transmitted, in all likelihood.

For reasons I can’t explain, PeeWee Herman and, in particular, his show, PeeWee’s Playhouse, has always held great appeal for me. Fans of the show (back me up here!) know that if PeeWee had had a BlackBerry, he would have married it— just like he did with the bowl of cereal. I now share this devotion. Not with cereal, people, but with my BlackBerry. It provides me with comfort, entertainment, advice, news alerts, laughs, and, most importantly, companionship. I am never alone when my square little black friend is with me. Allow me to explain the push-me-pull-me addiction of BlackBerry love. “Push” as in always wanting to be sending someone, somewhere, an email about EXACTLY what I’m doing at that moment, and “Pull” as in I have to know immediately what’s in that email that just vibrated into my world.

The phenomenon is fairly easy to understand: Receiving an incoming email message on your BlackBerry is akin to having a note passed to you in class from the cutest boy in school. You have to look at it. You need to look at it. The need is especially strong when you are in a situation where you can’t look at it (because to do so would either be rude or downright dangerous). It takes a huge amount of will power not to look at an incoming message, though you can always tell how many messages you have waiting for you by counting the number of buzzes. This is both intoxicating and annoying.

You can tell the depths of my devotion by the following typical attributes (which any true BB lover will have):

· The tell-tale thin red line on the right side of my stomach by my hip, caused by leaning over while wearing the holder and a too-short t-shirt or by making the amateur’s mistake of putting the clip straight onto a waistband rather than a belt.
· The feeling of the “phantom” (or BraxBerry Hicks) vibrations, causing me to immediately look at a “no new email screen” and then feign reading in case others have witnessed my pathetic act.
· The stunned “hmmm?” response I offer when people are speaking to me and I’m simultaneously trying to read an email.
· The glazed look that automatically creeps across my face once the hummmm hummm of an incoming email is heard and the opportunity to read is denied due to circumstances beyond my control (toilet training a child, for example).
· A renewed interest in prayer—prayer that once the sound of an incoming email is heard, the person you are speaking with will instantly be called away.

How did this happen? It’s my own fault, really. After months of pestering my husband to “put the damn thing down and listen to me” (like putting an electronic device down is even possible for a male unless it’s on fire, and never mind the “listening part”), I decided that if you can’t beat them, join them. And from the minute that sleek black shiny square became a part of my life, I knew we would be inseparable. I have a love/love relationship with my BlackBerry. There. I’ve said it. Happy Valentine’s Day!

Look for Kathy’s latest book, “I Am So The Boss Of You: An 8 Step Guide To Giving Your Family The “Business” on sale in bookstores everywhere March, 2013.  Follow Kathy on twitter @KathyBuckworth; visit www.kathybuckworth.com.