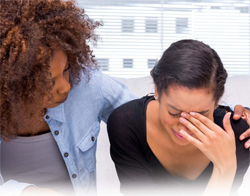 Miscarriage: what a terribly stigmatized concept. Miscarriage is such a healthy normal part of life; one that we wouldn’t want to go without as it most commonly weeds out genetic discrepancies with pregnancies. It is our body’s natural way of helping us to have
healthy pregnancies and healthy babies when the time is right.

My miscarriage: traumatic, lonely, shocking! Someone of my age (in their twenties) miscarrying? But isn’t this something reserved for women much older than me? No it certainly is not. Women miscarry for all sorts of genetic reasons. Mine…the pregnancy was ectopic which means that it was developing in the wrong place (in my fallopian tube in fact). Why am I telling you all of this? Because I think we have quite a predicament on our hands. We have arrived in a place as a society that leaves women in a very isolating and vulnerable position to experience miscarriage.

The norm has become that women wait until three months (or their second trimester) to announce their pregnancies once their chance of miscarriage has decreased to a nearly nonexistent point. But what does this do for women who miscarry? What does it feel like to miscarry when no one knew you were pregnant to begin with? I can tell you that it’s very difficult. If, when I miscarried, I had known women who had gone before me, it might not have felt so surprising, so paramount. Imagine if the moment I found out the pregnancy was ectopic I had already gone through or heard of miscarriages with friends and family. Imagine if for years leading up to my pregnancy it had been a normal part of life. Someone announces a pregnancy and then a few weeks later (or when they’re ready) mentions that it didn’t work out. Just imagine how much better one would be prepared to experience that situation themselves.

I know and respect that many women aren’t comfortable sharing their pregnancies with people until they’re out of the woods, but this perpetuates the problem. Why do we live in a time when only the viable pregnancies are valued? Why is it not the entire journey to parenthood that’s valued? We are stuck in a time when miscarriages are so traumatic that women receive grief counseling and take time off work. There are entire help lines devoted to supporting women in early pregnancy loss. Now I’m not in any way saying that no matter what, grief and sadness won’t accompany a miscarriage because it will, but there’s got to be a way to lessen the degree to which women experience this.

I know there are many reasons besides reaching the ‘safe zone’ that women hold back pregnancies, but I’m not going to over-complicate the ‘safe zone’ issue with these. Women nowadays know they are pregnant earlier than ever before. Years ago, many women didn’t know they were miscarrying or only knew they were pregnant for a couple of days before miscarrying and it was an expected part of the process, but in hiding it, we’ve stigmatized it. Women now find out they’re pregnant and quietly read every blog they can to find out about their risks of miscarriage. It’s become the be-all and end-all of life during childbearing years. I can tell you that I’ve been there and it was hard, but it wasn’t a make it or break it moment in life.

I remember the doctors kept saying to me, “the problem is that no one talks about it, so you don’t know how common it is”. Boy were they right, when I tell people about my story, everyone and their dog has a similar one (if not of themselves, then of a close friend or a family member). When I went back to work, I just kept wishing that the non-existent gossip mill would suddenly spring up so that everyone would at least know what I was going through. At the time, I didn’t need or want an outpouring of heartfelt messages, but it would have been nice if people had just known. You’re less alone when others share your experience.

If you’re a very private person and you’re not comfortable sharing your pregnancy early, then I’m not asking you to, but if you’re only not sharing your pregnancy early because that is the norm or because people don’t even take you seriously when you share it sooner (which has been my experience), then I challenge you to step outside the box and help me change the way we see this journey. Miscarriage is part of it, not for everyone, but for many. I am thankful that my body knew what to do to take care of me and put me in a place where I can have a healthy pregnancy when the time is right.

Life is too short to go through the journey alone, so let’s share our lives (the good and the bad) with the world around us.