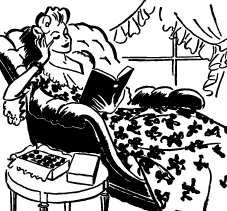 There is so much emphasis on the second Sunday in May, it’s no wonder most of the time it ends up in disappointment and dissatisfaction. Sort of like cramming a year’s worth of love into Valentine’s Day.  But just like the opponents of Valentine’s Day claim that you should be making your feelings known year round instead of just on February 14th, I think we need to start thinking about Moms all year round too.  Just think kids: Every day can be Mother’s Day!

But putting that responsibility on the people we mother, or the people whose children we mother, is probably only going to lead to more disappointment and frustration. That’s why this year I plan to Re-Matriate* Mother’s Day and make it my own…and make it last for 365 days.

There’s an old joke about a man who complains that his wife doesn’t do anything all day. One day he comes home to find his normally clean house in complete disarray, the kids are unusually messy, unclothed and unfed, and there’s nothing on or in the oven cooking for dinner.  He says “What happened here today?” And she responds with “The nothing I do all day? I didn’t do it today.”

So I say every day of the year we find a little way to not do the things we normally do, and not just on Mother’s Day.  Things like:

We seem to see Mother’s Day as a time to “take off” from doing these domestic duties, when the fact of the matter is, we can reward ourselves by doing a little bit of nothing, every day. Join me, won’t you?

*No, the word rematriate doesn’t exist. But it should. Am I’m taking that on.

Read Funny Mummy every month.  Follow Kathy on Twitter @KathyBuckworth and visit www.kathybuckworth.com Kathy’s 6th book “I Am So The Boss Of You” will be published by McClelland Books in Spring, 2013.