DIY Ornaments for Kids of All Ages 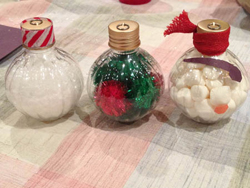 We love this time of year – everything feels so festive and jolly! Last week we wanted to make some ornaments that we would always remember from Christmas 2013. We gathered some elves, Andreas and Alexandra, and put together three easy DIY ornaments.

To get started you’ll need some plastic clear ornaments, we used spherical ones, and whatever you’d like to fill them with.

We put together three ornaments…

We filled the ornament with mini marshmallows (like I said, easy) and then glued a construction paper nose and patch on. Then we glued a ribbon around the top of the ornament. This originally started out as a snowman, but the kids decided they liked snow pirate better. It’s pretty unique!

We had some green and red pom poms left over from a different craft so we popped them into the ornament. Done.

You know that annoying fake snow? Ya, we had some of that laying around the house. It was a bit messy but the kids loved putting it in the ornament. Then we glued a ribbon around the top.

Have a happy holiday!