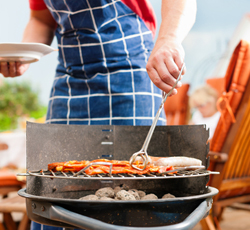 Part of the reason barbecuing is so appealing is that it seems to throw away the constraints of the kitchen and let the outdoors rule. However, this freedom from the tyranny of mealtime can easily be taken to out-of-control levels without some basic rules. Lucky for you, I came across some of these rules in the 1961 version of Betty Crocker’s Outdoor Cook Book. Let me share one with you now:

Develop some stern method of kibitzer control. People who would not dream of regulating your kitchen oven seem unable to resist “helping” the outdoor chef by stirring up his fire. They mean well. Indeed, such activity usually shows the first gleam of determination to try outdoor cooking for themselves. But threaten them off with the tongs, if necessary. Two firemasters is one too many.

I just love the idea of one suburban dad chasing another around his backyard with a pair of barbecue tongs, while Betty in her apron looks on approvingly. Handbags at noon, ladies. And is it just me, or do we not use the word “kibitzer” nearly enough when dealing with unruly children and adults?

Truly though, one of the great things about barbecuing is that it is normally relatively easy to suck the man of the house into actually cooking. Something to do with an open flame and the inherent explosive danger proves irresistible to these gullible fellows.Of course, the big downside is because they have spent a good twenty minutes searing a steak, they expect to get the credit for the entire meal, which, by the way, consists of salad, potatoes, fruit and dessert, all of which has taken you about two hours to complete. It’s okay, we can let them have this. The barbequing gets them out of the kitchen, into the backyard, and out of our hair. Personally, I try to find additional things for my husband to do while in the backyard manning the grill—including garbage clean up, putting the hose away, backwashing the pool, installing some fencing… Be creative and see how far it takes you. It is important, however, to make sure that hubby isn’t so distracted by these secondary activities that he forgets the meat on the barbecue itself. I learned this the hard way during an unfortunate oak plank flaming beef episode. Remember these are men; not universally known for their multi-tasking skill set.

Also, be prepared for the following conversation:

Him: Okay, honey, so I’ll take care of dinner tonight. I picked up some steaks.

Me: Great. So what are we having with them?

Him: Potatoes and corn.

Me: You have that?

Him: We always have potatoes and corn in the house. (Sadly, we do.)

Him: Right then, I’m starting up the barbecue.

Me: Yeah, listen, I only need about an hour to get the other stuff ready. You might want to wait.

Him: I’m ready for those steaks now.

Me: Fabulous. Hope they need about forty-give minutes on the barbecue because that’s how long the rest of the dinner is going to take. Hey, who’s setting the table?

Him: (Back outside again, stopping only to grab a beer out of the fridge.)

Me: Stupendous. Just cut my finger with a knife while trying to peel the potatoes because your idiot son used the potato peeler to whittle a stick last week. Oh, yeah. The corn is still hard and we’ve only found four forks.

Him: (Gone. The sound of a beer cap twisting can be heard from the deck.)

Him: And we’re ready. Kids, dinner!

Me: What the hell are you doing? The potatoes are half raw, the water for the corn hasn’t boiled yet and I’m still on hold with Telehealth to see about this red line that’s travelling up my arm from the cut on my finger.

Him: Mmmmmm. Now that’s a steak. Your Dad knows how to cook, eh guys?

If you plan to go the barbequing route during the week, you might want to make sure you have bagged salad, frozen French fries, or other “ready in an instant” side dishes in the fridge or freezer. As an alternative, you can also practice counting to ten. Whatever works for you.

Excerpt from “Shut Up and Eat! Tales of Chicken, Children and Chardonnay”, © Kathy Buckworth 2010. Reprinted by arrangement with Key Porter Books. Kathy’s 6th book “I Am So The Boss Of You” will be published by McClelland Books in Spring, 2013.Visit Kathy Buckworth online at KathyBuckworth.com.