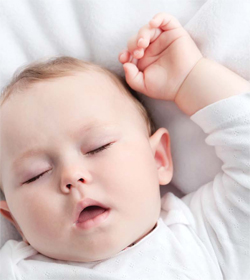 It’s not unusual for a baby who’s been sleeping like a pro to suddenly start refusing naps and waking at night. Sometimes, these sleep regressions are caused by teething, or by illness. Other times, they’re caused by a disruption to your family’s normal schedule (like a vacation.) They can also be caused by developmental milestones; if your baby’s learning to crawl, or to babble, it may affect her sleep. When these regressions strike, the best thing you can do is to carry on as you normally would. Stick to your normal routine, and avoid rocking or feeding your baby to sleep, if possible, since these can create sleep associations and dependencies.

Baby Sleep Tip #2: Is Your Baby Too Tired To Sleep?

If your baby’s not sleeping well, you may be tempted to keep him awake longer between naps, or to put him to bed later in the evening. But this probably won’t help your baby sleep better or longer; in fact, it may make things even worse! Babies have a tendency to become overly tired very quickly, and when a baby’s overtired, it’s actually harder for her to fall asleep and stay asleep. The saying “sleep begets sleep” proves true for most babies; those who are well-rested tend to fall asleep easier and stay asleep longer than babies who are sleep deprived. If you want your baby to sleep well, try to put him down for naps or for bed before he becomes overly tired. You can do this by monitoring his awake time; babies can handle just one to three hours of awake time (depending on age) before they need to go back to sleep. You can also watch for your baby’s tiredness cues; when your baby starts rubbing her eyes or fussing, it’s too late and she should already be asleep!

Around age two, it’s common for toddlers to start developing bedtime fears and having nightmares. At this age, toddlers are becoming more imaginative, so they’re quite capable of dreaming up terrifying, closet-lurking monsters. Separation anxiety also tends to resurface around age two, so don’t be surprised if your toddler is suddenly terrified at the prospect of being left alone in his room at bedtime.

While these fears often seem irrational to adults, rest assured that they’re very real to your toddler. Therefore, it’s best to be as empathetic as you can. Encourage your toddler to talk about her fears, and listen patiently as she does. Find small ways to help your toddler feel more secure at night (let him sleep with a dim light on, for example, or with the door open.) Monitor what he’s exposed to during the day; scary television shows or storybooks (even if they don’t seem scary to you) only serve to make bedtime fears worse.

Toddler Sleep Tip #2: How To Transition Your Toddler From Crib to Bed

At some point during your little one’s toddler years, it’ll be time to bid farewell to the crib and upgrade to a bed. Many toddlers make the switch between two and three (although some families will do it earlier or later, depending on their unique situation). Before you transition, be sure to carefully toddler-proof your little one’s room, in order to prevent accidents. And if you transition your toddler into an adult-sized bed, be sure to install safety rails to prevent falls. Once your toddler has made the transition, be aware that she’ll probably use her newfound freedom to pop in and out of  bed repeatedly. This is normal; it’ll probably take a few weeks for your toddler to adjust to the new sleeping arrangements. Deal with this “jack-in-thebox” routine calmly; if your toddler knows he can get a rise out of you, he’s more likely to continue the behaviour. Return him to bed matter-of-factly. Be firm, but loving. Eventually, the novelty of the new bed will wear off, and your toddler’s sleeping routines will return to normal.

Nap Tip #1: On-The-Go Naps Aren’t As Restful For Your Baby As You Might Think

Let’s be honest: it isn’t always possible for your baby or toddler to take every nap at home, in his own bed. Families are busy, after all! Sometimes, whether it’s in the car or in the stroller or in the shopping cart, naps have to happen on the go. But here’s something you may not have known: moving naps like these aren’t as restorative and restful for your child as naps that happen on a flat, non-moving
surface (like a crib mattress). They aren’t as long, for one thing, and during a moving nap, your child’s sleep won’t be as
deep (think of how you sleep in the car). The occasional on-the-go nap isn’t a big deal, of course – life happens! But if the majority of your child’s naps are happening on-the-go, you may need to rethink your daytime routines and schedules, and rearrange things so that
naps can happen at home most of the time.

Nap Tip #2: How Many Naps Does Your Baby or Toddler Need, Anyway?

Most parents know that naps are important, and that babies need them to stay well-rested and to develop properly. But how many naps does a child need at each stage of her growth and development? That’s a question that stumps some moms and dad. Here’s the lowdown: from birth until three to four months of age, most babies need about five naps per day. Around the three to four month mark, they’ll transition to four naps. They’ll stick with four naps until about five to six months; then, they’ll move to three naps per day. Around eight or nine months, they’ll transition from needing three naps to needing just two; finally, between 15 and 18 months, they’ll move to needing just one nap per day. The age for toddlers to drop the afternoon nap varies greatly; some toddlers stop napping completely at age two, while others continue needing an afternoon nap well into their preschool years, with the average being between three and four years old.