Sleep: and the lack thereof 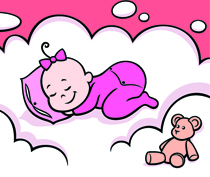 Sleep: and the lack thereof.  I didn’t really believe that I would be as tired as everyone said I would.  In fact, during the first week, I felt great – managing my night feedings and my baby’s desire not to sleep when everyone else was.  I was on a high all the while thinking that I was going to be the exception when it came to being tired. Then it hit me.  And it’s still hitting me all these years later. Do we ever catch up? I asked my mother a couple of years ago if she was ever tired (6 kids) and she said: I’ve been tired for the last 40 years. Oh. She never looked tired.  In my case, my kids have started to say that mommy’s tired even before I do…

It’s one of the few things that just don’t make sense. I mean, a new mom has enough to deal with without being exhausted all the time. It seems to me that newborns should have a built in, sleep through the night system, from day 1 (or at least day 7, when it starts to hit you!).

Here are a couple of Questions & Answers found in the chapter Sleep from my book Babies 0-6 months.

How should my baby sleep?

The general rule at the moment is to put a baby to sleep on its back. This is to prevent sudden infant death syndrome (SIDS or crib death). You can alternate the side of her head that she sleeps on by turning her head to the left or to the right to prevent her from getting a flat spot on the back and so you don’t (literally) wear out one side more than the other.  Place her so that her feet are almost touching the end of the bed (so that she can’t wriggle under the blanket) and don’t use a pillow or heavy comforter.  The room shouldn’t be too warm – it’s recommended to keep the temperature between 16-20 degrees Celsius (61-68 degrees Fahrenheit).

When will my baby sleep through the night?

There is no straight answer for this – often bottle-fed babies are more apt to sleep through the night before breastfed babies do – simply because the formula is a bit heavier and it takes longer to digest. Breast milk is easily digestible which means that you will be feeding more often including at nighttime. Slowly your baby will sleep for longer intervals at night though she will likely wake up after 4-5 hours because she will be hungry again. Sometimes babies wake up for other reasons or make noises while they are still sleeping – you can let your baby try and fall back to sleep on her own. If you are one of the lucky ones whose baby sleeps for 10 hours straight after a couple of months (I was not one of them…), you will notice that she will be more apt to feed often during the day to stock up for the night. Remember that babies in the first weeks of life need to be feeding at least every 4 hours…

Lianne is a Canadian mother of 4, entrepreneur and author of Lianne’s Quick Guide – for the busy woman. Her first title is called Babies 0-6 months and can be purchased directly from her website: www.liannesquickguide.com. She lives & works just outside of Amsterdam and can usually be found biking around on her bicycle built for 6.