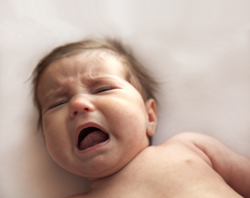 Crying is normal – all babies cry. In fact, crying is thought to be normal infant behavior, as it is the only way babies can communicate their needs of “I’m hungry” or “I need my diaper changed”. However, some parents endure hours upon hours of an inconsolably crying and extremely fussy baby, even after many failed attempts to soothe their crying fussy baby. Is it normal for newborn babies to cry for hours at a time? The simple answer: No, it’s not normal for babies to cry inconsolably for hours in a day. It’s likely he/she is suffering from infantile colic.

Despite the fact that infantile colic has been studied for many decades, the exact cause still remains a mystery; however, several independent theories have been proposed, such as cow’s milk protein allergy from the mother’s diet, immature digestive tract causing difficulties with digestion, or inadequate maternal-infant bonding. Unfortunately, there is no concrete scientific evidence proving these theories, which is why there has been no clinically proven effective treatment for infantile colic.

More recently, many experts now recognize that an imbalance in gut bacteria during infancy may possibly be the cause for certain pediatric conditions, including infantile colic. To help build an infant’s immune system and improve digestion, it is essential to have a healthy balance of good bacteria in the gut. But how do babies acquire a healthy gut? Newborns are born void of any bacteria; as they pass along the birth canal, they gather up a mixture of bacteria from mom. Oftentimes, the infant may not pick up enough “good” bacteria and instead gather up too much “bad” bacteria, consequently leading to conditions such as infantile colic. Researchers discovered that colicky infants have lower counts of one type of “good” bacteria called lactobacilli compared to non-colicky infants. Therefore, supplementing babies with probiotics containing lactobacilli can help build the right balance of friendly bacteria in a babies gut to provide colic relief.