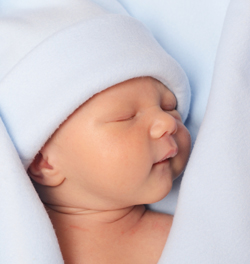 Babies are able to hear from birth, and respond to sounds starting from a very young age. In order for speech to develop normally, a baby must be able to hear. The first two years is the time during which hearing develops in children. It is important be able to recognize signs of a hearing problem as early as possible and seek medical attention if there are any concerns. Here is a guide of signs of normal hearing development by age through the first two years of life:

By Four Months of Age a Baby Should

By Seven Months a Baby Should

By Nine Months a Baby Should

At Twelve Months a Baby Should

At Two Years of Age a Child Should

If your child does not do these things at the appropriate age as listed above, or if you have any doubts about your child’s hearing, speak to your healthcare provider.

Is There a Special Hearing Test for Babies?

Yes. During a usual hearing test or Audiogram, a sound is played into the child’s ear and the child is asked to signal that she heard the sound. Obviously, the younger a child, the more difficult this is. In a baby, the technician looks for signs such as startling—body or facial movements that indicate the sound was heard. Fortunately, there exists a more sophisticated and reliable test called the Auditory Evoked Response Test. Normally, when sound is heard, it passes from the ear as an electrical signal through the auditory (hearing) nerve to the back of the brain where hearing is decoded and understood. By placing small electrodes on the baby’s head, the travelling electrical signal can be recorded on a graph. During this test, a sound is played and the response to the sound is then recorded on the graph. If the graph picks up normal electrical activity of the auditory nerve in response to the sound, this is considered normal.

What Exactly Is a Hearing Problem?

When we talk about hearing problems, we really mean deafness—not being able to hear. And there are two types of deafness. One is neurosensory deafness, in which the hearing nerves don’t work properly. The other one is conductive hearing loss, which basically we see very commonly in children who get recurrent ear infections where the space behind the eardrum is full of fluid that blocks the transmission of sound. So conductive hearing is not the same as neurosensory deafness. Hearing loss related to recurrent ear infections is usually not permanent and treated differently.

Once a hearing loss (deafness) is confirmed, the child is evaluated by an ENT (Ear, Nose, and Throat) doctor and other specialists whose aim is to attempt to restore the hearing loss through hearing aids or, in some cases, cochlear implants (devices inserted into the child’s ear or ears). In any case, the child will also need to have special speech therapy to help her talk and develop language as normally as possible.

There are certain risk factors that we know are associated with hearing difficulties or deafness. These include