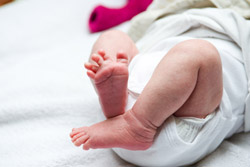 I remember putting on, what at the time, looked like an eeny, meeny diaper – onto my newborn. And it was too big!  Luckily my son gained a lot of weight fast and the eeny meeny diapers became too small very quickly! What a challenge it was to keep his legs down while attaching the diaper, hoping that he wouldn’t, at that moment, decide to pee.

Once we mastered putting on diapers, dealing with diaper rashes, cleaning etc. there was the poop. Too much? Too liquidly? Too often? I had no idea.  First it started off as almost black and gewy, then was so runny that it leaked out of his diapers on a regular basis.  And I tell you; I never really managed to get those stains out.   Then all of a sudden he stopped pooping. I got seriously worried and learned that he wasn’t constipated but was using my breast-milk so efficiently that there was nothing to poop out.  This only happened once for about a week I think but all of my kids did poop less after a while.

Now we are out of the “diaper” phase though my youngest still uses one at night. But she can put it on and take off on her own so it doesn’t really count!

Here are a couple of Questions & Answers found in the chapter Diapers from my book Babies 0-6 months.

How often do I need to change my baby’s diaper?

Obviously if your baby has pooped you want to change him as soon as possible and if you are out always have a change of clothes with you. Newborn poop is very runny and can escape through even the tightest of diapers. Newborns can pee up to 20 a day but you don’t need to change them every time. As a rule, change diaper every 2-3 hours or if you feel a full diaper.  You don’t need to wake up your baby to change her diaper unless you know she’s pooped.

How often should my baby poop?

At least once a day though babies often poop more often that that. On occasion, breastfed babies don’t poop for days, which doesn’t have to be a cause for worry as long as she’s peeing and not uncomfortable. This can happen because breast milk is so efficiently absorbed into her system.  Most important is that babies have 4-6 full wet diapers a day. This means they are getting enough to drink.

Lianne is a Canadian mother of 4, entrepreneur and author of Lianne’s Quick Guide – for the busy woman. Her first title is called Babies 0-6 months and can be purchased directly from her website: www.liannesquickguide.com. She lives & works just outside of Amsterdam and can usually be found biking around on her bicycle built for 6.